Three Books on the Judgment of Nativities, Book I 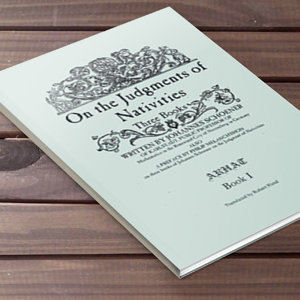 Schoener's work the Three Books on the Judgment of Nativities is one of the most complete texts on late medieval natal astrology that we have, giving a detailed view of the astrological methods of the time that is rivaled by no other book of the medieval and early modern periods with the possible exception of Bonatti's ninth tractatus. This translation consists of Book I of the three books, the "basics" of natal astrology. (Books II and III will be published in another volume.) Each of the classic questions of natal astrology as formulated by Ptolemy in Books III and IV of the Tetrabiblos is addressed in enormous detail using methods derived from a variety of medieval authors, both Latin and Arabic. And in addition to an almost overwhelming wealth of detail concerning each of these questions, Schoener also lists great numbers of traditional aphorisms from the major medieval sources. This is medieval astrology as it was before it was "purged" by would-be reformers who often did not have a clear understanding of its bases.

The following is the table of contents.